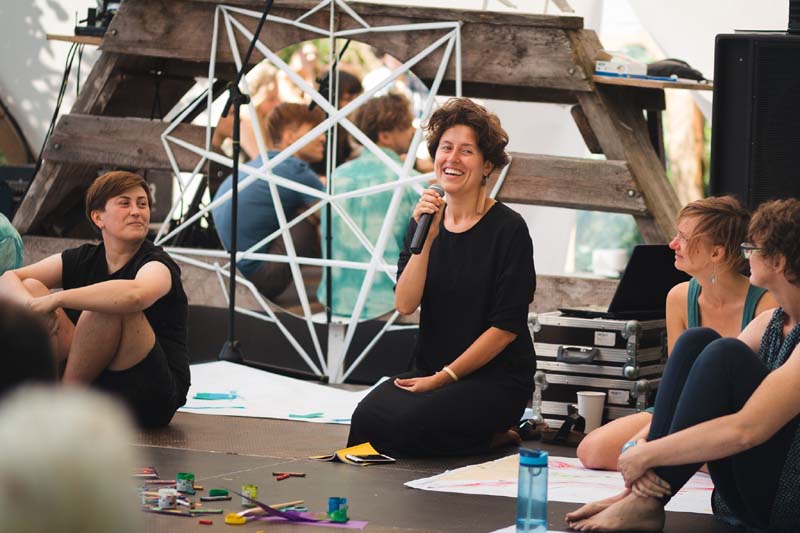 It is easy to say that someone is racist, but WHO AM I?

An interview with Agnieszka Bułacik, a co-founder of the new visions educational collective, made me realize how much routine thinking is still inside me. Although we often seem not to perceive the problem as ours, the first step to change is to own up: Yes, sometimes I think schematically.

Agnieszka Bułacik and Liene Jurgelane after ten years of working on artistic, cultural and  promoting social change projects, founded an educational collective in Berlin. Now, they offer workshops, research and consulting for different target groups (leaders, companies, organizations, universities). They propose non-normative ways of thinking, question oppressive norms and want to contribute to the change of various narratives functioning in different societies and in us. They dig up to emotions, try to transform thinking into more diverse, fair and open to everyone without exception.

“How to prepare internally for whatever may happen – decolonizing the future: cracks and connections”

– was the title of the workshops which took place on July 11 and 12 in Poznań, Poland as a part of the Short Waves Festival in the space of exchange – Hotel Europa. Agnieszka Bułacik and Margaret Amaka-Ohia-Nowak  invitated participants to explore the uncomfortable problems of contemporary Poland and the world and to find some solutions.

– Before the workshops, we had a lot of questions in our heads. We did not know how the perspective of decolonization would be perceived, how we can be sensitive to the context, what lessons we can learn for ourselves, for society. The workshops turned out to be a bull’s eye and  – at the end all participants asked us for another meeting.

All the world is shocked by the situation in Poland

In connection with George Floyd’s murder in the US and worldwide protests around the Black Lives Matter, also in Poland many people started to explore the subject of discrimination and they are eager to deconstruct both racism and colonial history step by step.

At the same time the current Polish government with the president turn down and demonize non-heteronormative people in a very direct way. President considers them to be a dangerous LGBT ideology and this homophobic rhetoric begins to influence some public behaviours.

Open stigmatization breeds divisions and even worse – it contributes to human tragedies. Many people, especially young, suffer from depression, anxiety, and have suicidal thoughts. Some of them committed suicide, others are leaving the country in search of tolerant space. There are a lot of peaceful demonstrations in the streets, but also some aggressive fights.

– What is happening currently in Poland is horrific. In public political debate, leaders speak in a contemptuous and dehumanizing way about various social groups – women, queer or non-white people. And, according to Allport’s pyramid of hate, their words lead to violence.

The new visions, together with the workshops participants, aim at discovering the source of discrimination and try to change what is harmful.

That is why the social change workshops they propose seem to be particularly crucial in today’s situation, both in Poland and in the whole world.

– During the workshops we analyse the root causes of inequality and reach out to our emotions related to them. Perhaps the global problems are not caused by dissimilar values, but rather by the way we exist in the world. Participants are invited to reflect on their relationships with themselves, with others, with nature and the planet. We invite them to “stretch” their ego so that different perspectives and ways of being in the world can fit in one person.

But how to reach beyond the walls, to people who do not want to open themselves to a different perspective?

– We prefer to act with care and cultivate what is important to us rather than act against others. Often, in disputes, two sides dehumanize each other – which we can perfectly see in more and more polarized public debate in Poland.

Discussing discrimination and systemic violence is inconvenient, so at the beginning of the workshops we emphasize that it is a part of process, because then we learn emotions, learn to feel all those emotions that we did not have access to before.

The people at the workshops open up, they can admit what is real, they can take a look at their opinions, take them apart and not turn it into an attack right away.

Workshops use the pedagogical tools of Gesturing Towards Decolonial Futures Collective.

These tools help us to see the bigger picture, unpack and test our views without fear of being judged, find definitions, manage the tensions we experience and deal with paradoxes. We can ask difficult questions, explain our observations without destroying the relationship.

– By using these tools, we find out how colonialism is rooted in our subconsciousness and how unconsciously we are subject to it. Structurally, every white person is in the position of an oppressor, a structurally privileged person. We are also not free from racism – we are taught from childhood that white people “discovered the world and created civilization”. We were brought up in a sense of superiority.

– However, the problem of discrimination is also context sensitive. For example, in Poland I have privileges resulting from my look, origin and knowledge of Polish. However, in Germany I am not exactly “white” in political meaning of “whiteness” – I am a migrant from Poland, which is connected with such  stereotypes as car stealing, alcohol, working for less money as nannies or sex workers.

Can I take pictures of black women?

– The trainee period in Nairobi showed me myself in a different light. I saw myself, a white person, going to photograph Kenya. Why am I allowed to do this? What structures make it possible that I can go to the country for three months with financial support of European governments, in the program of “development cooperation”?

Agnieszka and Liene work currently  on TAIGA – Transformational Leadership Program for women working in arts and culture in Eastern Europe.

The Festivāls Komēta in Riga, Latvia, is also space where new visions deals with uncomfortable issues of racism and all kinds of discrimination.

The road to change is difficult but it is the road to learning love.

Let’s go to each other, wherever we are now, let’s not build walls because we are all a community of the same world and each of us is valuable.

I live in Galway, a fairly small city in Ireland but among people from 150 countries. And today I am sure, if I left the place one day, I would miss diversity the most, because with that diversity I feel I can really live.

All photos and graphics made by private authors. All rights reserved.

What do you think about this post? I will appreciate your feedback! 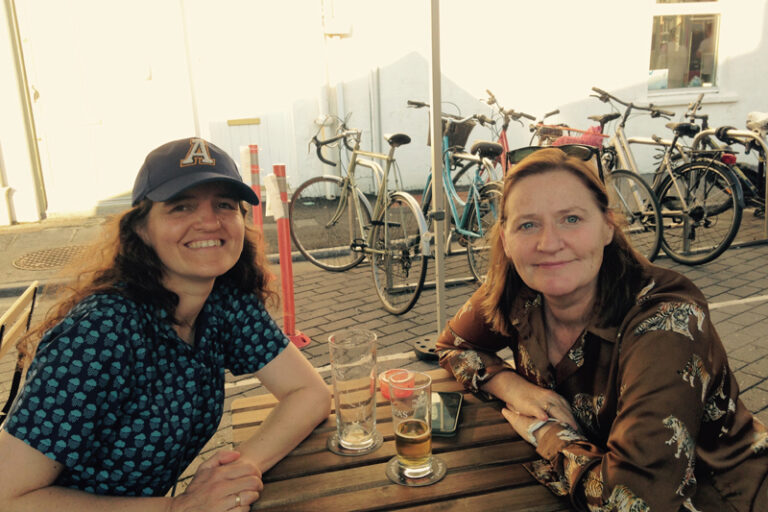 Sparkling Meetings at the Beginning of Autumn 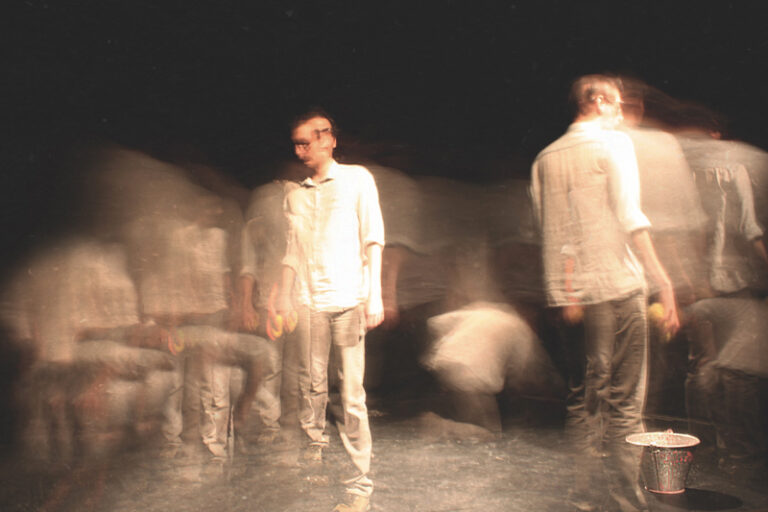 How Simple Things Can Connect Us – An Interview with Keyvan Sarreshteh 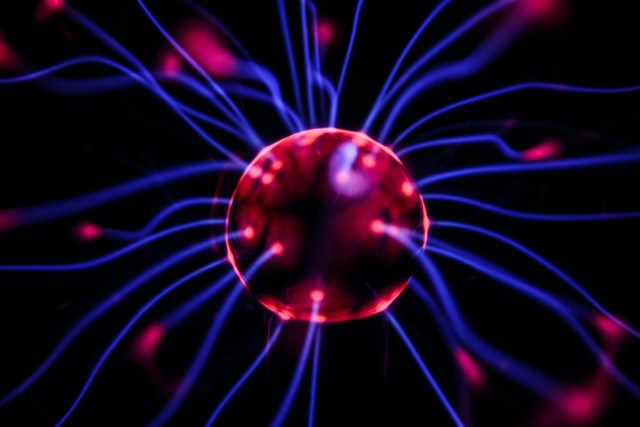